Our factors for the Semi-final match-ups were 1-1. Germany played a tough match but fell 1-0 to Spain. The Netherlands, with their "big game experience" were able to defeat Uruguay -- and move into the World Cup Finals against defending European Champion, Spain.
Congrats to both Spain and the Netherlands, as well as other teams that accomplished their goals.
Factors favoring Spain
Factors favoring the Netherlands
Who Will Win the Big Game?
Our factors lean towards Spain very slightly. This should be a good, tight, game. Note, however, in such a low-scoring sport, and with only one game for the championship, anything could happen.
at 10:48 AM

Book: Who Will Win the Big Game?

Check out our book "Who Will Win the Big Game?" -- on analytics applied to concepts of sport psychology.
Carlton J. Chin, CFA, is an MIT-trained engineer who likes to apply math and statistics to sports and the financial markets. Dr. Jay Granat is a psychotherapist who has worked with Olympic athletes.
at 10:08 AM

Email ThisBlogThis!Share to TwitterShare to FacebookShare to Pinterest
Labels: book PR, Who Will Win The Big Game?

We thought we would apply some of our same analysis for the World Cup. Here are some tidbits for this year's World Cup Final Four:
Across all the major sports we studied, "Big Game" experience has proven to be more important than expected, and this factor alone can often predict the winners of championships. Congratulations to each of the Final Four participants: and GO Germany!
at 8:19 AM 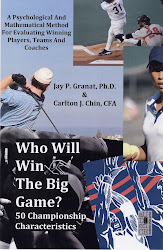